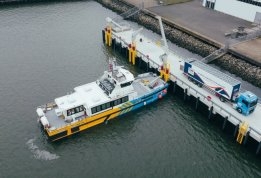 A local authority in the Netherlands has issued the country's first licence to supply hydrogen as a bunker fuel.

The IJmond Environmental Service has granted a licence to Windcat Workboats to bunker its Hydrocat 48 crew transfer vessel with hydrogen at the Port of IJmuiden, the Port of Amsterdam said in a statement on its website on Thursday.

The licence was issued on behalf of Velsen Municipality after research collaboration between the IJmond Environmental Service, the Port of IJmuiden and Port of Amsterdam.

The vessel takes wind farm construction and maintenance crew to and from Ijmuiden.

As bunkering hydrogen for shipping is a new development, the licensing process was quite complex

"This license represents a major step in the possibility to use hydrogen as a fuel for vessels and increasing the sustainability of the sector," Willem van der Wel, managing director of Windcat Workboats, said in the statement.

"As bunkering hydrogen for shipping is a new development, the licensing process was quite complex.

"With the first license now approved we expect the use of hydrogen as a green fuel to accelerate."

The move marks a milestone for the industry as is begins the transition away from traditional oil bunkers as part of efforts to eliminate its GHG emissions.

As a non-carbon energy carrier, hydrogen is viewed as one of the potential bunker fuels for the future, but with the use of hydrogen as marine fuel still in its infancy there are a host of engineering and political hurdles to overcome before it could be considered a commercially viable fuel choice for the global fleet.

Still, if nothing else the news form Amsterdam highlights that the use of hydrogen as marine fuel is possible - something that will presumably be welcome news to other first movers such as Future Proof Shipping (FPS) who aim to have their box ship FPS Maas burning hydrogen bunkers later this year.

The company's new office in Singapore's central business district will be led by Paul Van Vessem, its general manager for Asia.

The firm expects to certify its new generation of Series 2000 and 4000 mtu marine engines to run on second-generation biofuels and some synthetic fuels from the beginning of 2023.

The firm joined forces with Tomakomai Port Authority and Japan Petroleum Exploration Co for the trial.