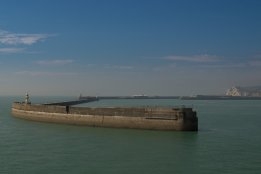 The incident happened in the English Channel on Sunday evening. File Image / Pixabay

UK special forces foiled a suspected hijacking in the English Channel on Sunday, according to news service the BBC.

The ship had been travelling from Lagos to the Fawley refinery, according to shipping intelligence service VesselsValue. It has since completed its journey.

The tanker's managers, Navios Tanker Management, confirmed the detention of the stowaways when contacted by Ship & Bunker Sunday, but declined to comment further on the story.

The BBC's Ministry of Defence sources called the incident a suspected hijacking. But in an interview with the BBC Bob Sanguinetti, CEO of the UK Chamber of Shipping, said there was no evidence yet that an attempted hijacking had taken place, and that an attempted kidnapping of crew was more likely.

Sanguinetti will be speaking at the IBIA Annual Convention 2020 next week.

The companies are seeking to build a ferry powered by electricity from a hydrogen fuel cell system that can produce up to 23 MW of power.