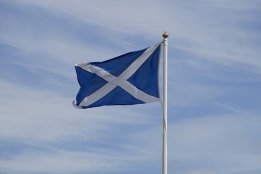 The facility will be developed at the Nigg Oil Terminal in the Scottish Highlands. File Image / Pixabay

The company has signed a deal with UK port operator Global Energy Group to develop a plant at the Nigg Oil Terminal, it said in a statement on its website on Tuesday.

"Green methanol can be made from many plentiful sources and with the efforts being made to capture North Sea carbon dioxide, we hope to become an important customer and consumer of projects such as the Acorn Project to produce clean fuels for the wider maritime transport sector," Tim Cornelius, CEO of Global Energy Group, said in the statement.

"Onshore and offshore wind is one of the world's fastest growing sources of energy, however, wind power must be dispatched as soon as it is produced, even if there is not enough demand for electricity.

"When this happens, operators have little choice but to disconnect the renewable source from the grid, leading to wasted energy and costs for governments and operators.

"This plant will have the capability of harnessing excess power to produce green methanol, which can then be used as an automotive or shipping fuel or as a chemical building block in thousands of everyday products."

Terms that bunker suppliers tend to use on the BDNs such as VLSFO or LSHFO do not follow ISO 8217 guidelines and may mean an incorrect emissions factor is noted for the receiving ship when the note is submitted to the IMO.

But ships warned to be cautious if navigating the area.