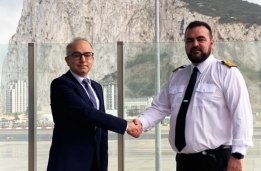 The Gibraltar Port Authority has appointed John Ghio as its new CEO.

Ghio is now serving as CEO and captain of the port as of this month, according to an update to his LinkedIn profile. He was previously the port's deputy captain from October 2018, and had earlier served as its bunkering superintendent and senior port officer.

Ghio's predecessor as CEO, Manuel Tirado, has retired, according to Gibraltar's government.

"I would like to thank Manolo Tirado for the excellent service he has given to the Port since 1983 and as Captain for the last three years," Vijay Daryanni, Gibraltar's port minister, said in a statement on the government's website on Friday.

"At the same time, I am delighted at John's appointment as Captain of the Port.

"He is in agreement with my ambitious vision for the Port. His experience in the private sector will assist us as we work towards marketing our services worldwide and as we look to bring new business to Gibraltar."

Ghio is a familiar face in the bunker industry, regularly presenting at industry events on developments in Gibraltar.

Philip Goedkoop will take over as CEO as of May 1.

The vessels will have the ammonia- and methanol-ready notations from classification society DNV.