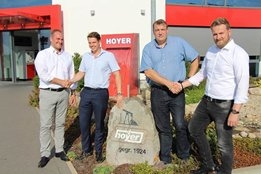 The Hoyer Group (Hoyer) says it has teamed up with Frommann Supply GmbH to provide a new barge-based MGO bunker supply operation in Hamburg.

Having been active in the market for some two years, Hoyer says it currently supplies ex-truck in all German sea-ports and inland ports, but took the decision to charter the bunker barge as delivery by tanker is largely prohibited in the Port of Hamburg.

“During the establishment of this business area in the Port of Hamburg and on the Lower Elbe to Cuxhaven and Brunsbüttel to Kiel, we are actively supported by the company Frommann Supply GmbH, which acts as an authorized sales agent on our behalf,” says Thomas Hoyer, CEO of the Hoyer Group.

With bunker barge Tauber Franken now on long-term charter, Hoyer says by the end of 2018 she will be modernized to a double-hull bunker ship in order to meet the current legal and environmental regulations and renamed TMS Lisa.

The vessels has 700 cubic meters of marine gas oil capacity, and two separate pump systems with an output of 125 cubic meters per hour.