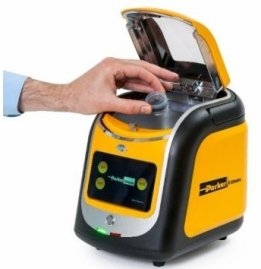 The closer the sulfur cap change on bunker fuel comes to reality, the more uncertainty seems to grow in the shippping and bunker sectors over how things will pan out.

Uncertainty over price and fuel quality being to the fore. But on the latter, Larry Rumbol feels he has the answer.

Rumbol, who is marine condition monitoring manager at UK-based marine technology firm Parker Kittiwake, has been in the business of producing a portable bunker fuel testing unit that yields benchmark results fast.

"The XRF Analyser won't give you laboratory standard data but it will give you the next best thing," Rumbol told Ship & Bunker.

To achieve lab standard, an oil test must happen under lab conditions, he explained. The whole point of the XRF Analyser is that it's truly portable, which means that anomolies can be uncovered straight away.

And with the composition of bunker fuel about to change, such a unit could prove invaluable.

Rumbol said the unit can serve players in the marine sector in three ways.

Ship operators can use it to check bunkers at the point of delivery. If anything untoward shows up, samples can be sent for further analysis in lab.

Port State Control can use the unit to check multiple ships, saving time for ship operators while allowing for the efficient monitoring of sulfur rule compliance.

"There is a third arrow to the analyser's bow," according to Rumbol, and that is relationship building.

Post-IMO2020, operators will have to deal with different grades of fuels. When changing over bunkers prior to entering an emissions control area, for example, the unit can be used to check fuel status. If it fails to meet the grade for whatever reason, PSC can be alerted thereby fostering a relationship with the compliance authority.

Misunderstandings, and fines, can be avoided as can fuel-related engine problems, he pointed out.

According to Rumbol, Parker Kittiwake has millions of dollars worth of quotes for the unit which is priced around $20,000, a price that varies on the quantity ordered.

The International Maritime Organisation 0.5% sulfur cap on bunker fuel has thrown up a range of concerns. But with the XRF Analyser, at least some of those concerns can be kept in check.

GP employees in the UAE are alleged to have taken advantage of working from home to manipulate trading records and defraud the company and its customers.