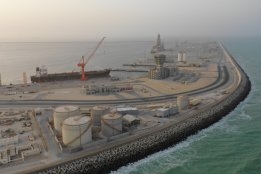 The terminal will offer all three key grades of marine fuel, including HSFO, VLSFO and LSMGO.

The vessel is able to deliver all three grades on offer at a pumping rate of up to 1,000 m3 / hour.

"OOMCO's development of the Duqm Bunker terminal is part of Oman's Vision 2040 development plan to diversify the Sultanate's economy, including the marine and logistics sectors, while leveraging the country's strategic location," noted Hilal Ali Al Kharusi, Chairman of OOMCO.

With the new facility, OOMCO is targeting vessel traffic accessing the Suez Canal, Arabian Gulf, and the Indian Ocean, and the new terminal comes at a time of expected growth for the region's marine fuels market.

"The bunker fuel market in the Middle-East and Africa region is expected to grow at more than 12% during the period of 2022-2025," said Hussain Jama Bait Ishaq, Acting Chief Executive Officer of OOMCO.

"Through this milestone, we are taking a step forward to achieving our goal to be among the top fuel bunker suppliers in the GCC by 2027."

The terminal is part of a wider project in the area and lies within the Duqm Special Economic Zone.

Construction of the nearby 230,000 barrels per day Duqm refinery is also underway, while the Ras Markaz storage terminal will have capacity for six million barrels of storage once completed in 2022.

"We look forward to establishing the Port of Duqm as a strategic bunkering hub for international shipping and Oman as a major shipping and logistics centre for the region and the world," added Ali Ahmed Muqaibal, General Manager - International Retail at OOMCO.

The firm is looking for candidates with business development experience to grow its yacht fuelling business.

Bunker Holding CEO Keld Demant discusses his firm's new strategy in an interview with Ship & Bunker after seeing the second-best results in the firm's history in 2021/22.

The vessels will have the ammonia- and methanol-ready notations from classification society DNV.