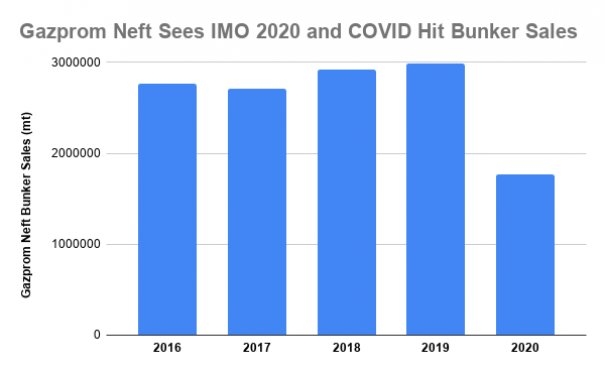 Russian energy producer Gazprom Neft saw its bunker sales drop by 40.8% last year as the market was hit by the combined effect of IMO 2020 and the COVID-19 pandemic.

The company sold a total of 1.77 million mt of bunker fuel in 2020, according to its annual results, down from 2.99 million mt the previous year.

The decline shows the scale of the problem that hit Russian bunker suppliers last year. While HSFO was the dominant bunker fuel, Russia's abundant supplies of the product made its prices competitive with the bunker hubs.

But IMO 2020 saw VLSFO take over as the shipping industry's preferred bunker fuel, and Russia's more limited supplies of middle distillates as well as higher taxes made it harder to compete. Ship & Bunker pricing shows St Petersburg's VLSFO has ranged from a $17.50/mt discount to a $3/mt premium to Rotterdam's levels so far this year, compared to an HSFO discount ranging from $14-38/mt in the same period of 2019.

The COVID-19 pandemic came as a second impact to the Russian market taking away the cruise industry traffic that is a significant part of sales at ports in the Baltic.

Russian market sources have told Ship & Bunker demand was down by as much as 75% at some ports for parts of last year.

Some 1.1 million mt of Gazprom Neft's total sales last year were low-sulfur fuels, the company said in a statement on its website on Thursday, up by 250% from the previous year. The company said this gave them a 20% share of the market for these fuels in Russia last year -- putting the country's total market at about 5 million mt/year.

"The MARPOL requirements that came into force in early 2020 have changed the fuel landscape for the entire shipping industry: instead of traditional marine fuel oil, petroleum products with a sulfur content of less than 0.5% are increasingly in demand," Alexey Medvedev, general director of marine fuels unit Gazpromneft Marine Bunker, said in the statement.

"Investments in refining modernization were planned in advance in Gazprom Neft, which made it possible to start production of environmentally friendly fuel at the Omsk Refinery in advance and to meet the growing demand for petroleum products with high environmental characteristics."

Oil Ekes Out Gains Under Covid Cloud And Biden Optimism

Meanwhile, OPEC contributes to the perception of tightening supply.

The firm is looking for candidates with previous trading experience.