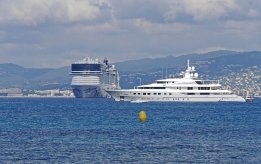 The French Mediterranean port of Cannes is to impose a 0.1% sulfur cap on the fuel used by cruise ships entering the port.

The rule -- which correlates to the sulfur cap on bunker fuel in place in emission control areas in the Baltic and North seas -- is to be in place from the start of next year.

The stricter sulfur limit has been imposed by Cannes Municipality and the Chamber of Commerce Nice Côte d'Azur, which operates the Vieux Port, according to French media outlet France 3.

Norwegian Cruise Line Holdings, which represents around 40% of the cruise traffic in and out of Cannes, has agreed to the ruling.

Companies that refuse to sign up to the rule will be banned from the port, the report said.

Cannes is a busy cruise destination with a dedicated cruise terminal.

Shipping demand growth appears healthy in the Western Mediterranean, but lower VLSFO prices will be needed to increase the region's bunker market share.