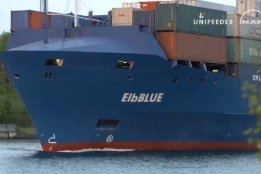 Its vessel ElbBlue, deployed on its Benelux-Russia service, lifted the carbon-neutral liquefied SNG ahead of its upcoming voyage to St. Petersburg.

The bunkers were produced at Kiwi’s Power-to-Gas facility in Werlte, Germany.

When underway for the trial the vessel will be powered by a blend of 20 tonnes of SNG and 20 tonnes of conventional fossil fuel LNG.

Other partners in the trial are MAN Energy Solutions, Elbdeich Reederei, LIQUIND Marine, and Wessels Marine.

With the exact emissions footprint of fossil LNG bunkers still subject to debate, developing the supply of carbon-neutral gas such as synthetic LNG is critical for gas bunkers to play a significant role as part of the marine fuel mix in the longer term.

"This is a crucial step on the road to decarbonizing shipping," said Stefan Eefting, Senior Vice President and Head of MAN PrimeServ, Augsburg.

"Today, we are demonstrating that any LNG-retrofitted ship can also run on fuels generated by power-to-X technology, and even as a mix of fuels depending on availability.”

The company has fitted two of engineering firm eConowind's TwinFoil wind systems to the ship.

The firm is set to sell almost 3 million mt of bunker fuel in the city-state's waters in total this year.