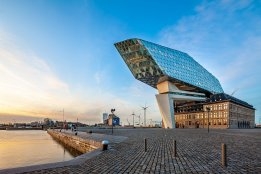 The new hire is based in Antwerp. File Image / Pixabay

Felix Vertommen has joined Trefoil Trading in Antwerp as a bunker trader as of this month, according to an update to his LinkedIn profile last week. Vertommen was previously a trader for United Bunkers, and had earlier worked another stint at Trefoil from September 2018 to May 2020.

Trefoil specialises in bunker supply at the Amsterdam-Rotterdam-Antwerp hub in Northwest Europe, and supplied 7.42 million mt in 2,314 bunker operations in 2018, according to its website.

The firm has been a subsidiary of Burando Maritime Services since 2010.

The MHO Asgard and MHO Apollo are capable of running either on diesel engines or using battery power.

Shipping firm Golden Ocean's accounts show its investment in TFG brought it a loss in the second quarter.

The unnamed ship was arrested on Friday morning about 11 nautical miles to the east of Tanjung Penawar.