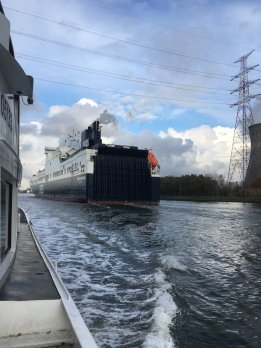 With ten years' experience of emissions abatement technology of its ships, DFDS is confident that the technology will continue to prove its worth in the years ahead.

Speaking at an industry event this week, the company's director for environment and sustainability, Paul Woodall, said the Danish ferry operator has made a "sizeable investment" in the technology (more commonly known as scrubber technology) which has been installed on 37 ships of its 59-strong fleet.

Woodhall said that the evidence supporting scrubber performance at sea was compelling.

Data culled from DFDS ships shows scrubber reliability to be very high with incidences of breakdown neglible. Comparing the performance of scrubber plus heavy fuel oil to marine gasoil when set against sulfur targets, the former outperformed the latter, Woodall said.

Woodhall said that a new study by Dutch research outfit CE Delft showed that port water quality is more susceptible to river borne pollution than it is to the washwater from ships. The results of the study are to be made available to the public, he said.

In favour of a move into renewables market.

The ship will be built by Oshima Shipbuilding, and is due to start operations in 2022.