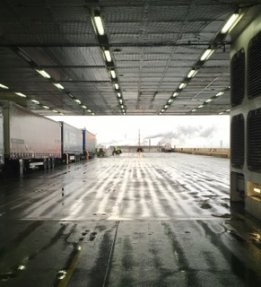 Danish ferry operator DFDS has laid up a fifth of its fleet in the wake of weaker demand for its services.

In preliminary quarterly results, the company said that freight capacity had reduced since the end of March and start of April on the 20 ferry routes the company is operating (two routes were suspended in mid-March).

"Capacity is reduced through lay-up of currently 12 of 50 ferries as well as other measures to reduce the number of sailings," the company said.  Some 2,200 employees have been furloughed, it added.

Cost cutting measures include a hiring freeze and reducing planned investment this year by around 20%.

Pre-tax profit for the period compared to the same period last year fell by 38%.  However, the company said it is well-financed in the current market conditions.

"DFDS is in a solid position with regard to both liquidity resources and financial flexibility to meet challenges and opportunities that may arise from present and future market conditions," it said.

Elenger launched its LNG bunker operation in Helsinki in June 2019.

Relentless Covid Headlines Cause Oil To Dip, Traders To Worry About A Stalled Economic Recovery

The virus is said to be causing energy giants to reposition their investments.

The ship will be the seventh in the company's fleet in Singapore.