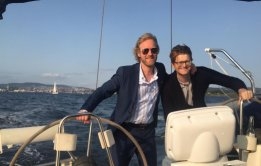 Nicholai Olsen (left) and Are Magnussen have backgrounds in oil and shipping. Image credit/CYRO Shipping.

Norwegian liquified natural gas bunker player CRYO Shipping has set out its stall for the alternative marine fuel's next step.

The LNG bunker market is small, regional and lacks commercial flexibility, the company has said.

To counter these limitations, Bergen-based CRYO Shipping's strategy is to "align their supplies with the business model of each individual client to make LNG available in any port where it is most cost effecive".

The company's first LNG bunker operation, which took place in Malmo, attracted "a lot of interest", according to company managing director Nicholai Olsen.

In addition, its offer of spot supply without any longterm commitments has been welcomed by the market.

The LNG bunker market "has to become more dynamic" and new players can "force a positive change" to secure LNG's future role as an alternative marine fuel, the company said.

Along with LNG marine fuel, the company can supply biogas and is developing a hydrogen bunkering service.