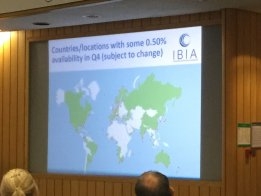 The bunker industry is prepared for IMO2020 with all fuel grades widely available but the situation is changeable and will remain so, International Bunker Industry Association's director told the IMO2020 symposiuim in London.

Unni Einemo gave a mostly upbeat picture on the state of play for bunker supply but acknowledged that solid demand for IMO2020 grade fuel had yet to make an appearance making it diffcult for the supply industry to respond in some areas.

Citing the latest volumes figures, Einemo illustrated her point by referencing September's bunker sales at Singapore, the largest world's largest bunkering port.  Take up of LSFO was 5%, she said.

Supplies of high sulfur fuel oil are being run down on the back of weakening demand.

"You can't expect suppliers to hold stocks of a product for which there is no demand," Einemo said.

The price of a cargo of HSFO, for example, could change in transit, heightening the commercial risk for bunker companies.

But the transition to 0.5% sulfur bunker fuel market is underway, she reassured the meeting.

Most bunkering hubs can offer LSFO while distillate fuel is "widely available".  HSFO is available in major ports but may be subject to contract in others, Einemo said.

Accountancy company Deloitte stepped down as NewOcean's auditor as of April 29.

The Kira Oldendorrf was bunkered in Singapore with biofuel supplied by Goodfuels.