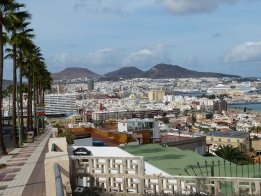 The alleged dumping was spotted to the northwest of Las Palmas. File Image / Pixabay

The Spanish authorities have arrested a tanker for alleged oil dumping near the Canary Islands.

The MR2 tanker Aldan was arrested on Sunday morning by the Spanish Navy and detained at the Port of Almeria, the country's transport ministry said in a statement on its website this week. The ministry alleges the ship was engaged in 'an illegal discharge of hydrocarbons' 147 miles off the coast of Las Palmas.

The spill was spotted from imagery from a European Maritime Safety Agency satellite, and has contaminated about 55 square kilometers of the Atlantic.

"The ship will remain detained until its managers proceed to deposit the fixed bond," the ministry said in the statement.

"Given the seriousness of the events, they could face one of the highest sanctions imposed so far by the General Directorate of the Merchant Marine."

The government will provide tax rebates on import tariffs for LNG used for bunkering as of the start of 2022.