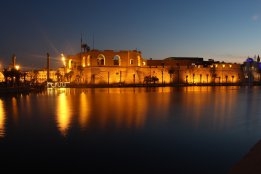 Libya has declared force majeure on most of its crude exports. Image Credit: File Image / Pixabay

A blockade on Libyan oil production is set to take 1 million b/d out of the Mediterranean sweet crude market, potentially driving a sharp increase in very low sulfur fuel oil (VLSFO) prices in the region.

"When storage tanks are full in a few days, Libya's oil production will be limited to 72,000 b/d from offshore fields and Wafa oil field, from over 1.20 million b/d yesterday," price reporting agency S&P Global Platts cited an NOC spokesman as saying Sunday.

An outage on that scale would have a significant impact on the market for low-sulfur crudes in the Mediterranean.

That would have a knock-on effect for VLSFO pricing in the region, as Libyan crude produces a high yield of the middle distillate components used for low-sulfur marine fuel blending.

On Friday delivered VLSFO prices at Gibraltar were assessed at $608.50/mt, compared with Rotterdam's level of $531.50/mt.

It would take at least three months to add refinery infrastructure and adjust production plans, according to an official at a Sinopec plant.

Delays are adding 15 days to off-hire time, according to Scorpio.