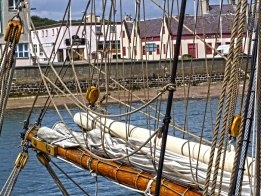 A first step towards hydrogen-powered ferries for the Scottish Western Isles has come with the publication of a feasibility study.

Based on power sourced from local wind farms, the comprehensive study was funded by the Point and Sandwick Trust and supported by the Scottish government.

Among its findings was the comparative cost of hydrogen generated from wind farm electricity.

The kilowatt-hour (kwh) cost of hydrogen was higher than marine diesel.

However, if a UK government scheme was included in the analysis, the cost of hydrogen against marine diesel looked more attractive (£0.09 per kwh to £0.05 per kwh).

Point and Sandwick Trust spokesman and project manager Calum MacDonald called the report "a first step", according to local news provider the Stornoway Gazette. The Western Isles, on the UK's northwest coastline, "have the best renewable resources in Europe", he said.

Hydrogen is one a number of alternative marine fuels gaining interest on the back of the debate on marine emissions and shipping's contribution to global warming.

Millar sees IMO 2020 driving some companies out of business, while mergers and acqusitions may hit others.