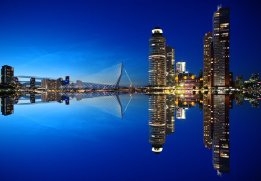 Bunker fuel sales have been resilient at Rotterdam this year. File Image / Pixabay

Bunker fuel sales at Rotterdam, the world's second-largest marine fuels port, jumped by 7.9% in the third quarter from a year earlier.

LNG bunker fuel sales reached 48,623 mt, down by 12.6% since the second quarter but almost double the level seen in the third quarter of last year.