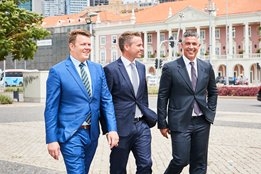 Monjasa has opened a new office in Luanda, Angola to support its various business activities in West Africa.

The supplier, who commenced bunkering operations in the region in 2009, has also confirmed the completion of its first IMO2020 compliant fuel delivery in WAF - a delivery of 200 mt by African Runner on 21 October in Lome, Togo.

“The West Africa bunker market has developed very positively over the past 10-15 years and today matches bunker destinations like Las Palmas or South Africa. As an example, we are currently making IMO 2020 compliant fuel timely available across the region and we have just completed the first supplies in the Gulf of Guinea," says Group CEO, Anders Østergaard.

"In Angola, local representation is a key enabler for further developing our services, and now we get to show our commitment in Luanda and emphasise personal relations even further. We will continue to invest in West Africa for the benefit of our partners, the local communities and Monjasa."

Details of the new office are as follows:

Environmental groups have backed the move, although they had sought a mandate of as much as 6%.

The organisation, set up by the Aspen Institute, now has 19 members.