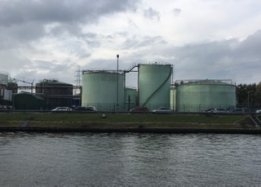 Fuel oil stocks in Fujairah are rising heavy fuel hitting a two-year high, according to the latest market data.

The total figure for oil product stocks was 25.1 million barrels.

According to Platts, the figure breached the 25 million barrel mark "for the first time since the end of April". Overall stock levels were up by 10%, heavy distillates hitting a two-year high (records were started at the beginning of 2017).

Fujairah in the United Arab Emirates is in the top three of global bunkering destinations by volume sold.

The ships will be fitted with a hybrid system including 500 kWh of energy storage, allowing them to operate with zero emissions while in port.