IMO2020: Credit Is the New Black but Comes at a Cost 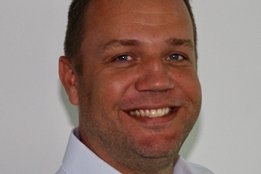 At Liberty Marine Fuels we have obviously followed the debate regarding the possible coming issues leading up to and beyond 2020. Topics such as quality, availability and the use scrubbers or not are all important. Lately the question about credit has had a lot of focus with some bunker companies reassuring the market that they have access to plenty of credit. However, although some bunker companies allegedly have access to plenty of credit doesn't make their customers more creditworthy. Nothing points in the direction of increased credit lines for customer just because they will be facing higher prices.

So what impact will the increased prices have for the customers?

Many customers don't seem to have thought about the credit line issues they might be facing leading up to and beyond 2020 as many are reluctant to change their usual buying patterns despite a changing market situation. With the prices likely to increase, combined with maintained credit lines, we believe, will have a negative impact on the buyers. Obviously, the bunker trading companies don't have any plans on cutting their profits why they will be forced to increase margins considering the higher prices combined with existing credit lines for their customers. Our example below shows the impact based on a credit line of USD 1,000,000 - in today's market that you will be able buy approximately 2,085 mts. However, when you need to switch to VLSFO you will only be able to buy approximately 1,515 mts which is about 27% less.

In our opinion the buyers should really consider how and from whom they should buy the 27% which they risk missing having credit for leading into 2020.

The assumption of some bunker trading companies leaving the market (some already left) we expect credit leaving the market. The bigger trading houses are likely to have enough credit available to sustain their business but that comes with a cost for the customers as illustrated in the example below.  The bunker trading companies will surely be increasing their margins which is fair enough giving the fact that access to credit becomes of utmost importance.

Below is our very conservative view on what will happen to the margins. Furthermore, trading houses also need to utilize their own credit lines with the physical suppliers the best possible (read: profitable) way. 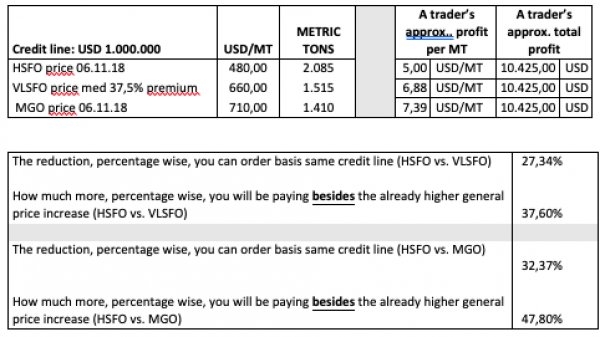 It's important for us to stress that the trading houses certainly will be playing an important role as credit will the big issue. For some customers the trading houses will be able to lift the credit. However, we are of the opinion that the customers should consider extending their network of suppliers and/or traders sooner rather than later so they are well prepared for IMO2020.

As bunker brokers we, Liberty Marine Fuels, believe we can help the customers extending they network of suppliers and/or traders which will give them an increased combined availability of credit. Also, it will limit the customers counterparty risk which post OW Bunker's bankruptcy must be very important.

* the increase in prices of 37.50% are based on statements from various experts saying anything from 25% to 50%

Liberty Marine Fuels was established in 2015 on the back of the turmoil which characterized the bunker industry.

The bunker brokers of Liberty Marine Fuels have more than 40 years of combined experience from major bunker hubs around the globe such as Singapore, Gibraltar, Cape Town, Dubai and Denmark.

The company is strategically headquartered in Denmark in between time zones to effectively service customers needs on a worldwide basis.

Keld Demant: 'I Have Never Been Inside the Individual Trades'

In his court evidence on Tuesday Demant set out why he did not put a stop to Dan-Bunkering's jet fuel trades after legal concerns were raised with him.

The company saw revenues climb by 45% and its marine fuel sales volumes jump by 20% in the 12 months to September 30.