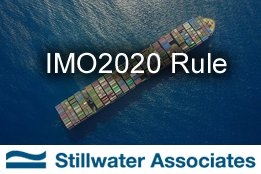 The International Maritime Organization (IMO) is moving forward with a marked reduction in the global maximum sulfur content of marine fuel (aka bunker fuel oil) on January 1, 2020. Implementation of this "IMO 2020 Rule" will have a pronounced impact on relative market prices for marine fuels, other refined products, and crude oil on a global basis. As discussed in Dave Hackett's article, IMO 2020: The Next Big Thing for the Oil Supply Chain, the IMO 2020 Rule and its market pricing impact will be keenly felt by shipowners, marine fuel suppliers, refiners, and associated industry sectors. This article will provide an overview of the IMO 2020 Rule and include relevant background.

The IMO is a specialized agency of the United Nations. IMO summarizes its assigned responsibility on its website as "responsibility for the safety and security of shipping and the prevention of marine pollution by ships." In October 2016, IMO passed a resolution that will likely have a pronounced impact on the global maritime, marine fuel supply, petroleum refining, and related industries beginning January 1, 2020.

The Marine Environment Protection Committee (MEPC) is one of IMO's standing committees. Beginning with its 1973 convention (via MARPOL 73, later modified by its Protocol in 1978), MEPC has implemented rules regulating marine pollution. These rules initially took effect in 1983. To address air pollution from shipping, MEPC adopted Annex VI to the International Convention for the Prevention of Pollution from Ships (MARPOL Convention) in 1997. Annex VI took effect in May 2005. In October 2008, MEPC revised its MARPOL Annex VI rule to further reduce marine fuel maximum sulfur content by approving Resolution MEPC.176(58).

IMO's Revised Annex VI rule in 2008 also required a review and decision by IMO no later than 2018 on whether to implement the marine fuel sulfur content reduction outside ECAs (Regulation 14) in January 2020 as approved or postpone implementation until January 2025. That review occurring prior to MEPC's 70th session ("MEPC 70") in October 2016 included a study led by CE Delft concluding that fuel availability would not be an issue. EnSys Energy and Navigistics Consulting partnered to provide MEPC with a second view of the potential impact of the IMO 2020 Rule, even though the study was not requested by MEPC. The EnSys-Navigistics study concluded that industry would have more difficulty complying with the IMO 2020 Rule than what CE Delft's analysis reflected.

On October 27, 2016, IMO decided to move forward with implementation of its Revised Annex VI rule (its IMO 2020 Rule) on January 1, 2020 as scheduled. MEPC's decision appears to have been based largely on the study by CE Delft that they commissioned.

Per IMO, MARPOL Annex VI currently has 87 Parties, representing more than 96% of world merchant shipping tonnage (in other words, most of the ships operating internationally). The Revised Annex VI rule therefore will have a major impact globally on the maritime industry, marine fuel suppliers, petroleum refiners, and related industries.

MEPC 71 was held in July 2017. There were no initiatives advanced in MEPC 71 that would defer or phase in enforcement. Given the absence of proposals to MEPC to delay or phase in implementation and given that the next MEPC meeting (MEPC 72) will not be held until April 2018, Stillwater believes that the IMO 2020 Rule will be implemented January 1, 2020 as an 85% step function reduction in maximum marine fuel sulfur content globally outside of Emission Control Areas. We do not believe that this rule will be modified to defer enforcement timing or utilize a phased in approach.