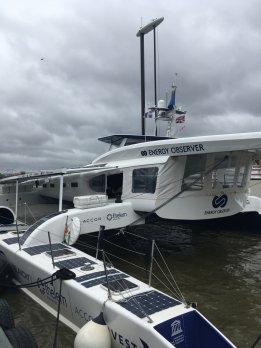 The experimental vessel is a product of a joint project involving two Asian firms, Yanmar and Japan's Toyota, according to the website plugboats.

Separately, Toyota has the technology onboard the Energy Observer, a catamaran undertaking a global voyage powered by solar power and hydrogen.

The Japanese manufacturer is one of the backers of the eco ship which is seen as a laboratory for alternative marine fuels.

While oil-derived bunker fuel remains the principal fuel for ships, other energy forms are gaining in prominence with liquified natural gas seen by many as the commercial front-runner.  But shipping firms are taking an increased interest in other alternative forms, one of which is hydrogen.

The new offering will involve Minerva using verified carbon offset certificates equivalent to the emissions value of the bunker fuel being bought.