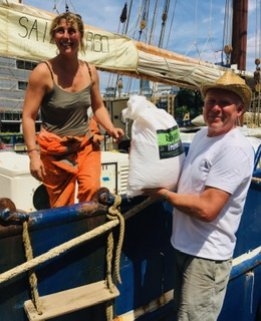 Delivering cargo with zero emissions is possible, a French shipping company has shown.

By adapting traditional sailing skills to a modern context, the Blue Schooner Company has moved cargo from Portugal to the UK under sail without emitting any carbon dioxide (CO2).

The only CO2 emitted on the entire leg of the voyage is under diesel engine power when the boat is manoeurved into dock.

The company is the brainchild of Frenchmen Guillaume Roche and Jean Francois Lebleu.

Speaking to Ship & Bunker at St Katherine's Dock in London on Sunday, Roche said for a long time he had wanted to use his professional maritime experience to good use and do something about climate change.

The result is the 27-metre long schooner, Gallant, which made the trip with its cargo of foodstuffs from the north of Portugal to London calling at France and the southwest coast of the UK along the way. 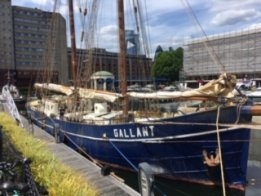 "This way of delivering cargo by sail is commecrially viable," said Roche, who is also the ship's captain.

"But it would be better if we had a bigger ship."

The interest in cargo by sail is high particularly from the Caribbean and South America to Europe.

Roche said that his three-year-old company is in the process of attracting funding for that second ship. And he is eager to make it happen.

The demand is out there, Roche said, and a bigger ship would turn that demand into a reality.

The new hire will be responsible for finding more shipping companies to start using biofuels.

Bunkers in 2020 cost on average 7% less than in 2019, but the price spread last year was considerably wider.