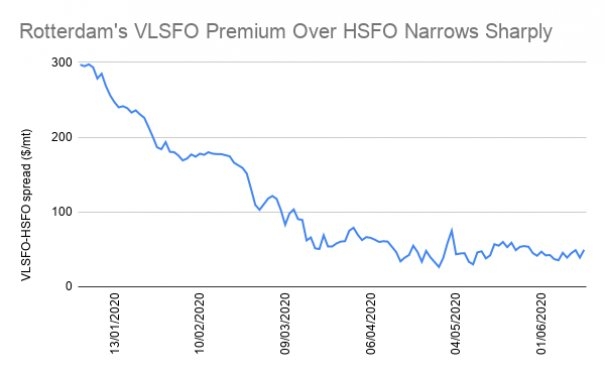 Euronav sees a dymanic response by the US refining industry as being behind a large part of the narrowing spread. Image Credit: Ship & Bunker

Shipowners with scrubber-equipped tonnage currently bemoaning the narrow spreads between high sulfur fuel oil (HSFO) and very low sulfur fuel oil (VLSFO) can blame the US refining industry for their troubles, according to tanker company Euronav.

The spread was just $49.50/mt at Rotterdam on Monday, according to Ship & Bunker pricing, down from $298/mt at the end of 2019. The spread, sometimes referred to as the hi-5, is a key measurement on the savings to be made by using scrubbers and continuing to burn cheaper HSFO.

US Refiners Reshuffle the Deck

While bunker suppliers had expected there to be little demand for HSFO after IMO 2020, meaning ships with scrubbers could pick it up at heavy discounts, US refiners have bought large quantities of high-sulfur straight run fuel oil from Europe to run through their coking units, according to Rustin Edwards, head of fuel oil procurement at Euronav.

"All the refineries went big, from what I saw, for high-sulfur straight-run," Edwards said in a webinar hosted by price reporting agency S&P Global Platts Tuesday.

"It dramatically reshiffled the deck on high-sulfur."

Euronav had originally expected the spread to narrow significantly in 2021, Edwards said.

The Port of Rotterdam noted the trend earlier this year as it described a change in fuel oil tradeflows through its facilities to the rest of the world in the first quarter.

"There was a sharp fall in the trading of fuel oil between Russia and Singapore, for which Rotterdam has been the throughput location in recent years," the port authority said in April.

"Instead, much of the fuel oil went directly from Russia to the United States for refining."

The increased refining of high-sulfur straight-run product in the US will have tightened the spread at both ends, removing high-sulfur components from the supply chain and increasing output of middle distillates that can be used for VLSFO.

"We are seeing more and more distillate-rich blends showing up in the market," Edwards said.

Meanwhile, research shows a huge drop in greenhouse gas emissions due to lockdowns.

A slowing in demand from bulkers and tankers and higher fees for using the Panama Canal may have been part of the drop.