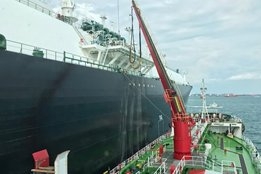 ExxonMobil has started supply of its 0.50% sulfur VLSFO bunkers in the Singapore and ARA (Amsterdam, Rotterdam and Antwerp) markets.

The Energy Major first announced the fuels last year, highlighting at the time a key differentiator of its offering is that all its 0.50% VLSFO has global compatibility.

In July the company then announced it was branding its new IMO2020 grade fuel offering as "EMF.5" as part of the ongoing efforts to differentiate its offering from the competition.

"We're not doing this for ourselves, we're doing this for our customers. And I think it's important for us to do this now in an industry that continues to highlight quality as a major concern," Luca Volta, Marine Fuels Venture Manager, told Ship & Bunker at the time.

The EMF.5 fuels as they are actually a range of fuels with slightly different characteristics depending on which part of the world they originate, but all will be sold against the ISO 8217:2017 specification.

Sinopec bunkered the VLCC New Vista with 1,600 mt of VLSFO at Qingdao on 11 May.

Last year the industry was preparing for a $4 billion jump in annual bunker costs. What it got was a 2020 with marine fuel prices at their lowest for several years.