ExxonMobil to Brand its IMO2020 Grade Bunkers as EMF.5 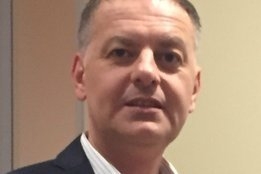 ExxonMobil today has revealed that it is branding its IMO2020 grade fuels as "EMF.5" as part of the ongoing efforts to differentiate its offering from the competition.

The fuels themselves were announced last year and are already notable as currently being the only IMO2020 grade offering from a supplier that is guaranteed to have global cross-compatibility no matter where in the world the bunkers are lifted.

"We are so confident in the nature of the fuel, the quality of the fuel, the compatibility of the fuel, and the way we are formulating the fuel, we want to make sure these are easily recognizable and they stand out from a crowd of un-described very low sulfur fuel oil (VLSFO) products," ExxonMobil's Luca Volta, Marine Fuels Venture Manager, told Ship & Bunker in an interview ahead of today's launch.

There will be no specific publicly available spec for the EMF.5 fuels, which Volta explained is actually a range of fuels that will all have slightly different characteristics depending on which part of the world they originate.

Rather, they will be sold against the ISO 8217-2017 specification and all be residual marine fuel (RM) in nature with properties that include a high viscosity and density above 950 kg/m3.

"Importantly, they do not just meet the ISO8217's Table 2 specifications, they pass ExxonMobil's stringent "fit-for-use" assessment including a guarantee of stability and combustion characteristics," said Volta.

Details on pricing continues to remain minimal (EMF.5 will be more expensive than HFO but no news yet as to by how much), which is a position taken by virtually all suppliers of 0.50%S material at this stage of the run-in to 2020.

Demand for IMO2020 grade fuel is widely expected to begin in earnest at the end of Q3 and into Q4 of this year, a prediction echoed by Volta based on conversations ExxonMobil has had with its customers.