Maersk Confirms It Will Not Use Scrubbers for IMO2020 Compliance 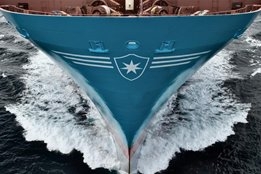 Maersk will not use scrubbers for compliance in 2020. Image Credit: Maersk

Maersk has confirmed its decision to use compliant fuels, and not scrubbers, for compliance with the upcoming global 0.50% sulfur cap on marine fuel due to come into force on January 1, 2020.

"We participate in discussions of possible solutions in our own right and as a board member of the Trident Alliance, an association of shipowners committed to strong enforcement of the sulphur legislation," Maersk wrote in its latest Sustainability Report.

"In 2017, A.P. Moller - Maersk decided not to pursue scrubbers, a technology designed to wash the sulphur out of exhaust fumes and discharge it into the sea. We will instead opt for replacing the cheaper bunker oil with fuels with a lower sulphur content."

Niels Henrik Lindegaard, Head of Maersk Oil Trading, had originally told Ship & Bunker of its decision last year after pulling out of a trial involving a higher sulfur fuel in conjunction with a scrubber.

Maersk Line has also given its backing to what it says is an "unprecedented" call for a ban on the carriage of high sulfur bunker fuels, arguing it is the best way to enforce the upcoming IMO 2020 regulations.