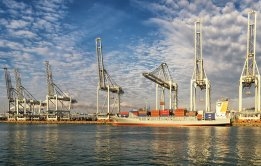 VLSFO prices at Rotterdam have generally been the lowest of the top four bunkering hubs this year. File Image / Pixabay

The drop in crude prices over the past month, and the subsequent drop in marine fuels, has left very low sulfur fuel oil (VLSFO) prices at the top bunkering hubs converging to the closest levels on record.

The VLSFO price spread between the most and the least expensive of the top four bunker ports -- Singapore, Rotterdam, Fujairah and Houston -- narrowed by $7.50/mt to $23/mt on Monday, according to Ship & Bunker pricing, the least on record since VLSFO came into widespread use late last year.

The price spreads have narrowed significantly since the start of the year, when the volatile market conditions engineered by the newly-introduced IMO 2020 regulations delivering large price discrepancies between ports.

This narrowing of the spreads may prompt shipping companies to be less discriminating about their choice of bunkering port by price.

This narrowing of the spreads, as well as the generally low level of current prices, may prompt shipping companies to be less discriminating about their choice of bunkering port by price, tending more towards picking whichever port is more convenient operationally.

The widest spread on record among the top four ports was on January 6, when VLSFO at Fujairah was trading at $195.50/mt more than Rotterdam's level.

A similar trend can be seen in prices for high sulfur fuel oil (HSFO), with the spread between the most and the least expensive of the top four down to $22.50/mt on Monday, from this year's peak of $98.50/mt on January 8.

HSFO prices have generally been more sluggish to react to the rapid drop in crude over the past month, narrowing their discount to VLSFO and reducing the fuel bill savings enjoyed by vessels with scrubbers fitted.

The wording of the EU's regulations may mean Russian fuel oil imports are banned as well as coal from August 10.

Meanwhile, analysts squabble over what happens next.