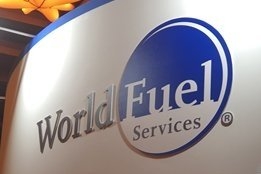 World Fuel Services (WFS) [NYSE:INT] says it has increased its unsecured credit facility to $1.8 billion and extended its term to July 2024.

The move is the latest sign by investors of a renewed confidence in the company's performance, something that has been reflected in the firm's share price that has risen some 85% since dipping to a 52-week low of just under $20 at the end of December. Yesterday it hit to a 52-week high of $36.85.

The firm's marine fuel unit has been particularly challenged during that period, and over the last two years the supplier and trader has made some significant changes to that part of its business.

Perhaps most notably, WFS says it has been cutting back on its "low margin, low return" activity in Asia, a move that has reduced its overall bunker sales volumes but boosted profitability.

In April WFS' CFO, Ira M. Birns, said that process is now almost complete and volume has likely bottomed out.

While WFS did not specially mention its marine unit or the impending IMO2020 rule in its latest announcement - which will require vessels to spend billions of dollars more on fuel - the extended credit facility will no doubt be seen as further good news for its bunker business.

"As a result of this transaction, which was significantly oversubscribed, we have further enhanced our financial flexibility, providing additional low-cost capital to re-invest in our business, execute on strategic acquisitions and return capital to our shareholders," said Birns.

The premium for very low sulfur fuel oil (VLSFO) delivered in Singapore over local cargo prices gained $3.18/mt to $14.57/mt in the week to Friday.