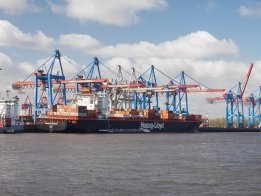 The company's average bunker price climbed by 67% on the year to $703/mt. File Image / Pixabay

Container line Hapag-Lloyd saw a small increase in its bunker consumption in the first half of the year as its average fuel price surged.

The firm consumed a total of 2.12 million mt of bunker fuel in the first six months of the year, up by 0.7% from the 2.11 million mt used in the same period a year earlier, it said in an earnings release on Thursday.

"This increase was essentially caused by a rise in vessel capacity compared with the prior-year period," the company said.

The firm expects further rises in bunker prices in the second half of the year.

VLSFO, distillates and LNG took up 88% of the firm's bunker consumption in the first half, down from 92% a year earlier. This was as a result of HSFO consumption climbing from more scrubbers being fitted to Hapag-Lloyd's ships.

Bunker consumption per slot rose to 2.42 mt in the first half from 2.41 mt a year earlier.

The modular unit producing up to 100mt/day has been developed by WasteFuel.

Tommy Lykke Wind has joined the firm as senior future fuels manager in Copenhagen as of this month.