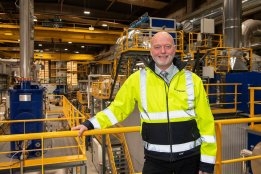 The firm won the approval last month after extensive testing since early 2021 at its facilities. Image Credit: Alfa Laval

Engineering company Alfa Laval has won approval in principle from classification society ABS for the operation of boilers on methanol.

The firm won the approval last month after extensive testing since early 2021 at its facilities, it said in an emailed statement on Tuesday. The firm was seeking to achieve the same steam output with methanol as could be seen with conventional bunkers or natural gas.

Alfa Laval will next move on to a pilot installation on an oceangoing vessel.

"Alfa Laval is looking at the full scope of methanol's influence on board," Lars Skytte Jørgensen, vice president for energy systems technology development at Alfa Laval's marine division, said in the statement.

"The most natural choice for boilers is to fire them with the vessel's primary fuel, but methanol's low-flashpoint nature and the differences in its energy density require a new approach to the burner and fuel supply systems.

"It was important for us to develop that approach, and we are proud to have it validated by ABS."

ZeroNorth CEO Søren Meyer discusses his firm's latest acquisition and how to reduce the fragmentation of the bunker industry's data.

The new service will cover the bunker needs of both firms as well as seeking third-party customers.