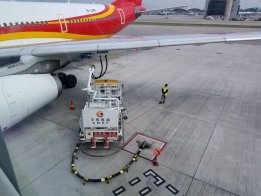 Using jet fuel as a bunker blend stock may turn out to be somewhat problematic. File Image / Pixabay

The practice of using jet and automotive fuels as blend stocks for bunkers may be leading to flash point problems, according to insurance association the UK P&I Club.

It is now 'widely acknowledged' that jet and automotive fuels are being blended into bunkers, the firm said in a statement on its website Wednesday.

"In VLSFO, the prime indication of this new practice is a general reduction in viscosity and density," the association said.

In the note the company linked this with reports of 'a significant uptick' in fuels found to be off-specification because of a flash point lower than the minimum in Singapore and the Middle East.

But in Europe at least, market sources told Ship & Bunker earlier this week that media reports of jet fuel ending up in bunkers are likely to have been overstated, with the practice being not particularly widespread.

The move may see trans-shipment centres set up just outside EU waters, the shipping organisation said.