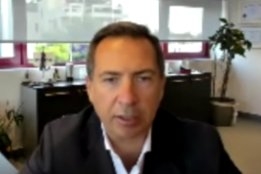 Stamatis Tsantanis, CEO at Capesize owner Seanergy Maritime, says scrubbers have failed to deliver on their promise of an easy route to profit in the IMO 2020 era.

Speaking to Noble Capital Markets in an interview released Thursday, Tsantanis said the technology was uneconomical, complicated, and difficult to maintain.

"What was extremely misleading form the beginning is that the scrubber fitting was a paper exercise - you just pushed a certain button and you would lock in to certain spreads and you would make a certain profit. That is totally not the case," he said.

"Installing a scrubber is an exercise that has proven to be extremely complicated. Maybe not for us that we chose a better yard and better scrubber manufacturers, in association with our charterers of course."

Tsantanis' comments add to an already gloomy picture for the technology, and one that is a sharp reversal on the outlook for scrubbers from just a year ago prompting a rethink by both owners and manufactures on their role in the global fleet.

A key driver for this has been the unexpected market conditions of 2020. Oil prices are low and the high / low sulfur spread is at a fraction of what was predicted pre-IMO 2020, which in turn has had serious implications for the technology's ROI.

"Payback was six to twelve months, this is now five years," Tsantanis said.

The poor economic environment for scrubbers has been compounded by reports that certain manufacturers have used sub-standard materials to construct their scrubber systems, meaning repair work has been required within as little as six months of installation.

These issues aside, Tsantanis says from his experience even the regular operation and maintenance of scrubbers has been a challenge, one that has been compounded by crew change and social distancing requirements brought on by measures to address the COVID-19 pandemic.

"The maintenance requirements of the scrubbers are tremendous. The additional forces and weight on the ship as well as the operational fatigue as a product of the scrubbers is quite significant," he said.

"In an era where sending service technicians aboard a ship is extremely difficult, in the event that something goes wrong with the scrubber, how are you going to fix it? There are hundreds of new piping connections into the engine room, and the equipment itself is not sophisticated but a very demanding piece of equipment with respect to maintenance. So from the installation point of view, I would be against the scrubber.

Offering an alternative view on the scrubber market recently was Nick Confuorto, chief operating officer at CR Ocean Engineering, who believes the unfavourable conditions for scrubbers are a temporary phenomenon.

"Oil companies will not be able to continue giving the low sulfur fuels away at such low prices for much longer," he said.

Company says details on a replacement fro Sara Shipman will follow at a later stage.