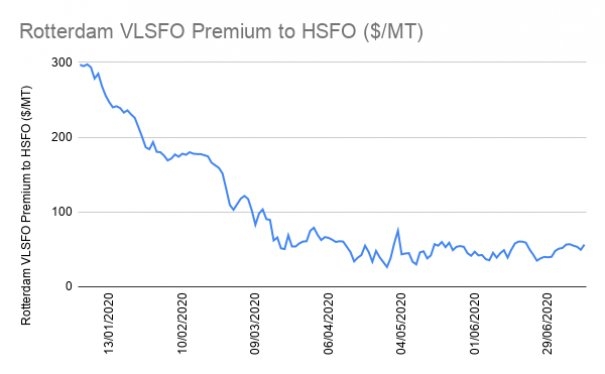 This year's narrowing in the price spread between high- and low-sulfur bunker fuels, combined with shipping companies having less cash available for capital expenditure, has led to a harsh environment for scrubber manufacturers.

The price spread between high sulfur fuel oil (HSFO) and very low sulfur fuel oil (VLSFO) -- a key measure of how much money vessels with scrubbers can save on their fuel bills -- was at just $49.50/mt at Rotterdam on Friday, according to Ship & Bunker pricing, down from $298/mt at the end of last year.

Clients who are struggling to survive do not prioritise further investment in environmental equipment.

Several companies are reported to have laid off staff in response to the reduced profitability of scrubbers leading to fewer orders.

"It's pretty tough to sell scrubbers, when we are restricted on travelling, and there's the credit crisis and the oil crisis," Anders Skibdal, CEO of Pureteq, told Ship & Bunker earlier this month.

"Freight rates are low, and clients who are struggling to survive do not prioritise further investment in environmental equipment.

"It's truly a difficult world."

Pureteq has laid off 20% of its staff in response to the crisis, and may consider cutting more as it adapts to the new market conditions, Skibdal said.

Several shipowners including Great Eastern Shipping, Frontline, Scorpio Bulkers, Scorpio Tankers, International Seaways and DHT Holdings have postponed or cancelled planned scrubber installations this year. In some cases it was strength in the freight markets, rather than weakness, that caused a rethink -- for tanker owners seeing unusually high returns in March and April, keeping their ships in the market looked a better bet than sending them away for a scrubber retrofit.

"It seems that many look at today's unusual pricing and do not look at what will be the normal once COVID-19 and the present slump in the global economy is over," Nick Confuorto, chief operating officer at CR Ocean Engineering, told Ship & Bunker last week.

"Oil companies will not be able to continue giving the low sulfur fuels away at such low prices for much longer."

Shipping research firm Clarksons suggested as many as 700 retrofits could be cancelled or postponed.

"We will cancel as many scrubbers as possible, primarily to preserve cash," he said in a call with analysts in April.

"Where the contractor or the supplier is late, and we can get out of the contract, we will."

Technology company Pacific Green has also started to retreat from scrubber sales, it said last month. The company is set to close its Norway office and focus its marine business on sales to existing customers.

"As a result of COVID-19 and the narrowing of the oil price spread we have been forced to rethink the sales strategy in our marine division," Scott Poulter, chairman and CEO of Pacific Green, said in a statement announcing the move.

At the start of July maritime news website ShippingWatch reported ME Production had laid off or sent home more than half of its employees in response to the slump in scrubber sales.

And in April engineering firm Wärtsilä said its first-quarter profit had halved with a weak order book for scrubbers.

A look at the crude market shows the bunker industry should not expect the HSFO-VLSFO spread to widen any time soon, according to trading company Integr8 Fuels.

Crude oil production cuts by the OPEC+ coalition have led to prices for Urals crude -- which has a high yield of HSFO -- rising relative to other blends, prompting refiners in Northwest Europe to take on light crude from the US and West Africa, Integr8 said in a research note this month.

That phenomenon has led to strength in HSFO versus VLSFO, and is likely to continue while OPEC+ production remains low.

That said, only a modest widening of the HSFO-VLSFO spread may be needed to give a little support to the scrubber market.

Wärtsilä has suggested a spread above $50/mt may be enough to generate some interest -- and Friday's spread at Rotterdam was less than a dollar away from that level, according to Ship & Bunker pricing.

"From customers we hear in their calculations, the spread somewhere between $50-$100 /mt provides an interesting investment case for them, so as long as it is in that range scrubbers are still attractive," Sigurd Jenssen, the company's director of exhaust gas cleaning systems, said in an interview with price reporting agency S&P Global Platts in April.

Anders Skibdal lent some support to that analysis in his comments earlier this month, saying a widening of just $30-50/mt in scrubber spreads could reignite the market.

"We believe that the market will pick up again pending the COVID-19 situation," he told Ship & Bunker.

"As I see it, there are no short-term or medium/long-term solutions that are more feasible than scrubbers."

SEB will start reporting the 'climate alignment' of its shipping portfolio from next year.

The HR and communications departments of Bunker Holding will now take on that function for the wider USTC organisation.

As part of its wider decarbonization efforts.