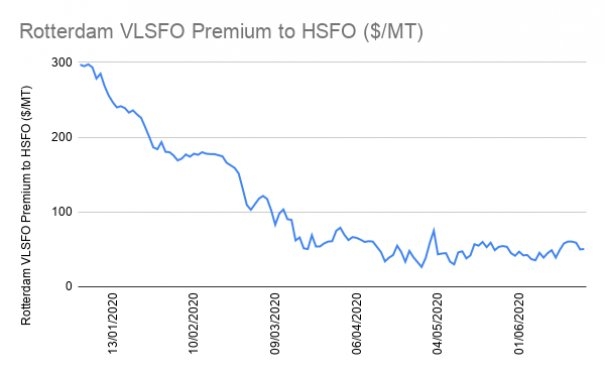 Technology company Pacific Green has decided to scale back its presence in the marine scrubber business, in the latest sign of weakening prospects for the emissions-cleaning technology.

The company is set to close its Norway office and focus its marine business on sales to existing customers. it said in a statement on its website.

"As a result of COVID-19 and the narrowing of the oil price spread we have been forced to rethink the sales strategy in our marine division," Scott Poulter, chairman and CEO of Pacific Green, said in the statement.

"Our parent company has strong cash reserves and we continue to look forward with optimism as we believe that the effect of the Pandemic will generate significant change in the energy sector and increasingly require our sustainable technologies."

The price spread between high sulfur fuel oil (HSFO) and very low sulfur fuel oil (VLSFO) -- a key indicator of the profitability of scrubber investments for shipowners -- continues to trade at a much narrower level than expected last year after collapsing in March.

At Rotterdam on Monday the VLSFO premium to HSFO was just $50/mt, according to Ship & Bunker pricing, down from $298/mt at the end of last year.

The latest data from shipping research firm Clarksons also gave a gloomy outlook for scrubber manufacturers this week, estimating that up to 700 installations may be cancelled. At the start of the year the company suggested as much as 19% of the global fleet by tonnage could have the emissions-cleaning systems installed by the end of 2020.

The company has four offices worldwide and plans a further expansion.

The final meeting of Bomin Bunker Oil Pte Ltd will be held online on November 22.