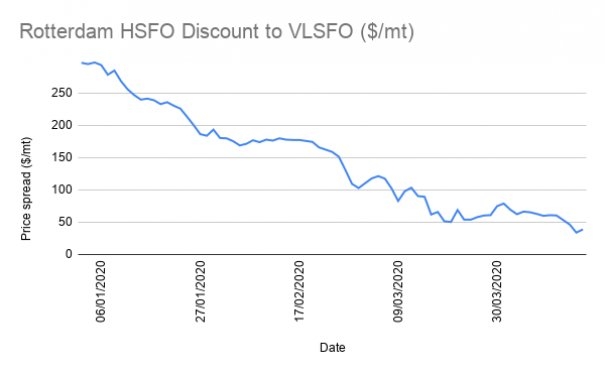 The narrowing of the discount has accelerated since the crude collapse in early March. Image Credit: Ship & Bunker

The discount for high sulfur bunkers in Rotterdam has for the first time narrowed to under $50/mt, a level seen as an important psychological barrier for scrubber economics.

The spread between high sulfur fuel oil (HSFO) and very low sulfur fuel oil (VLSFO) at the Dutch port first dropped below $50/mt on Tuesday, according to Ship & Bunker pricing, and narrowed to as little as $34/mt by Wednesday, a record low.

The HSFO-VLSFO spread represents the savings that can be achieved by shipowners with emissions-cleaning scrubbers equipped to their vessels that allow them to continue to burn otherwise non-compliant higher-sulfur fuel; the equipment costs several million dollars per vessel, and a wider spread would allow the shipowners to earn back their capital expenditure more quickly.

In an interview with S&P Global Platts earlier this month Sigurd Jenssen, director of exhaust gas cleaning systems at technology company Wärtsilä, suggested that the $50/mt level could be an important psychological barrier to break through.

"From customers we hear in their calculations, the spread somewhere between $50-$100 /mt provides an interesting investment case for them, so as long as it is in that range scrubbers are still attractive," Platts cited Jenssen as saying in an article published on April 2.

Some shipowners are already putting off scrubber installations in response to the current situation; protracted delays at Chinese shipyards and the opportunity to cut costs in the face of the coming economic shocks may also be factors in these decisions.

Earlier this month ro-ro shipping company Wallenius Wilhelmsen said it had cut $20 million of planned spending by cancelling scrubber installations on four of its ships.

In response to the declining profitability of scrubbers over the past few months, advocates of the emissions cleaning systems have been keen to emphasise their environmental credentials.

"Media reports concerning the narrowing of fuel prices should not be a deterrent to the wider take-up of marine exhaust gas cleaning systems (EGCS), as the technology remains the optimal, most effective means of meeting MARPOL Annex VI requirements," pro-scrubber group the Clean Shipping Alliance said last month.

"Existing and new users of EGCS have invested in the technology first and foremost to reduce the impact of sulphur emissions on human health."

Even with a payback time of more than three years ... the scrubber would be likely to make money for the shipowner after that time ends.

While the narrowing spreads are likely to affect the earnings in the freight markets of scrubber-equipped tonnage, they are still unlikely to make the installation of this equipment over the long run; even with a payback time of several years, if current spreads were to persist, the scrubber would be likely to make money for the shipowner after that time ends.

And for shipowners that managed to have their scrubbers installed in time for the start of IMO 2020, when spreads were at their highest, the savings made over the first six weeks of the year will have already paid back a significant share of the installation cost.

"Longer term, the market will normalize and the financial logic doesn't disappear; the savings are still there," Wärtsilä's Jenssen said.