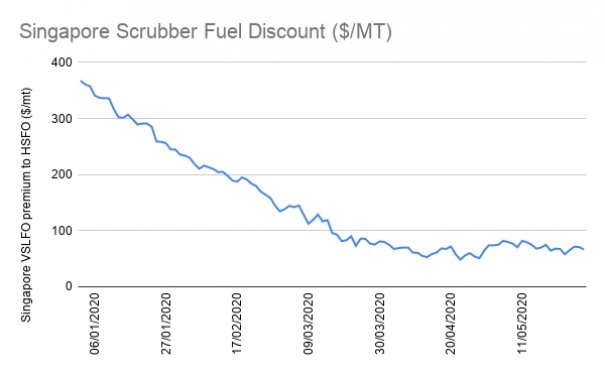 The discount in fuel bills enjoyed by shipowners with scrubbers has declined significantly since the start of 2020. Image Credit: Ship & Bunker

Indian shipowner the Great Eastern Shipping Company has decided to call off one planned scrubber installation but will press on with four others, despite the falling profitability of the emissions-cleaning systems, the company said last week.

The company plans to contine with four scrubber installations on its Suezmax vessels that had been postponed from the end of last year because of high freight rates, and then again from the first quarter of this year because of the COVID-19 lockdown causing delays at Chinese shipyards.

But one other that the company had planned to install on a gas carrier or an Aframax tanker will now be cancelled, chief financial officer G Shivakumar said in a call with analysts last week.

The current spread between high sulfur fuel oil (HSFO) and very low sulfur fuel oil (VLSFO) in Singapore, a key measure of the profitability of the systems, is "not a great number, and does not give you a payback on your scrubber," Shivakumar said.

But forward prices point to a spread of $100-110/mt for the next few years, Shivakumar said, and "with those numbers you get back your capital at least and maybe a small positive return."

"It is not likely that it will stay this way forever."

The vessel will be refuelled by Total's purpose built 18,600 m3 capacity Gas Agility.