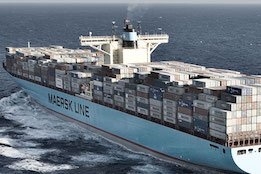 Quadrise Fuels International plc (Quadrise) Thursday announced that the company, along with its supply partner Compañía Española de Petróleos, S.A.U. (CEPSA), has received formal notification from Maersk Line that the shipping company intends to let the Operational Trial Agreement between the parties expire once the MSAR emulsion bunker fuel currently onboard the test vessel has been consumed.

As Ship & Bunker has previously reported, Maersk Line partnered with Quadrise to trial its MSAR emulsion bunker fuel, and while Quadrise's technology is capable of making 0.50 percent compliant product, the bunkers being trialled by Maersk were higher in sulfur and being burned as part of a scrubber-based solution.

"Maersk has now formally notified the Company of its intention, in achieving compliance with the International Maritime Organisation's (IMO) 2020 sulfur limit environmental legislation, to use only compliant fuel (less than 0.5 percent sulfur) from 2020 and that the use of MSAR alongside exhaust gas scrubbers (scrubbers) will not be considered as an option for Maersk going forward," explained Quadrise Thursday.

Maersk has now formally notified the Company of its intention... to use only compliant fuel

Despite the most recent development, Quadrise notes that, as confirmed by Maersk Line, the MSAR operational trial has so far been successful.

Quadrise says that, in order to support the commercialisation of MSAR to the wider global marine industry, it will continue to work with Maersk toward the release of the interim inspection report and an Interim LONO for MSAR use.

"The underlying opportunity remains substantial and many in the marine fuel and refining industries see the use of high sulphur fuel and scrubbers as the most economic option for compliance with the 2020 IMO sulphur regulations," said Mike Kirk, Executive Chairman for Quadrise.

"It is also important to note that this decision by Maersk is enabling both QFI and Cepsa to further progress plans for the use of the spare MSAR production capacity for new customers in the marine and power markets."

Last month, Quadrise said the timetable for trials and commercialisation of its MSAR emulsion bunker fuel product was likely to see further setbacks.

But remain much lower than they were at the start of the year.