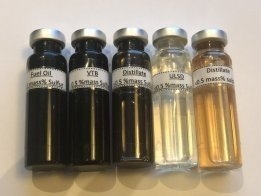 Disputes over the sulfur content of new IMO 2020-compliant fuel blends are likely to be declining, with fewer fuels now tested as being over the new 0.50% sulfur limit, according to testing company VPS.

"In terms of sulfur compliance the VLSFOs have seen a significant improvement," Steve Bee, group commercial and business development director at VPS, said in a webinar hosted by Ship & Bunker Tuesday.

The high initial level is likely to have been caused by the remnants of high sulfur fuel oil that had not been properly cleaned from bunker storage and delivery infrastructure being accidentally mixed into VLSFO at the time of the switch.

These high-sulfur contaminants will have gradually been washed away since the start of this year, leading to the subsequent decline.

Some cases of more start non-compliance remain, however; one sample from Europe was tested as having 1.43% sulfur content, Bee said.

A replay of Ship & Bunker's 'State of the Industry' webinar from Tuesday, as well as the presenters' slides, can be found here.