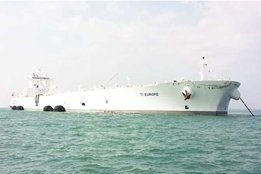 Euronav has started to supply IMO2020 grade VLSFO bunkers to its vessels, just over two months ahead of the new 0.50% sulfur cap on marine fuel.

As reported last month, the major tanker owner has purchased 420,000 metric tonnes of compliant fuel that is being stored off-Singapore on its 3 million barrel capacity ULCC, Oceania.

"We have already begun to deploy this fuel on to our fleet and in preparation of January 2020," Brian Gallagher, Euronav’s head of investor relations, said during the firm's latest earnings call.

Euronav also says it has completed the clearing of some vessels' fuel systems ahead of IMO2020 and is moving forward with preparations for the rest of its fleet of 72 vessels that burn some 1 million tonnes of fuel annually.

“We are looking to do this in a fairly quick scale over a period between now and Christmas with the least disruption as possible,” Gallagher told Reuters.

The 210,000 DWT Capesize bulker will be built by Nihon Shipyard Co and is due for delivery in the first half of 2024.

The Marshall Islands and Solomon Islands proposal will now be discussed at the next session of the IMO's GHG working group in October.

The company has signed a memorandum of understanding with German green technology company Hy2gen to collaborate on a study looking into issues around large-scale commercial adoption of ammonia as a bunker fuel.