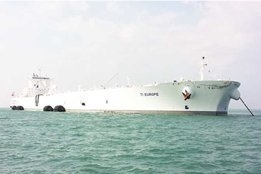 Euronav still sees scrubbers as a future option despite having paid a premium of just $47/mt over HSFO for a significant quantity of IMO2020 grade 0.50%S bunkers.

In its latest IMO2020 Preparation Update, the major tanker owner says that so far it has purchased 420,000 metric tonnes of compliant fuel, over the purchase period paying $447/mt for VLSFO compared to 400/mt for HSFO.

The volume, comprising of both 0.50%S and 0.10%S product, represents a significant amount of its annual bunker requirement for 2020.

The firm's 72 vessels burn about one million tonnes of fuel annually.

The fuel is currently being stored on its 3 million barrel capacity ULCC, Oceania, which it says is being repositioned to the Singapore area later this month.

The firm also owns a second ULCC, Europe, it says is currently under commercial time charter with a third party until the end of 2019.

"It is important to stress that the majority of our procurement activity so far and going forward has been on a new compliant fuel of 0.5% Sulphur content and not a blended product," Euronav said.

"We believe that after a period where the markets will adapt to the new regulations, there will be ample and sufficient compliant fuel available to the shipping industry."

The news is particularly significant as part of the ongoing debate on whether a scrubber-based strategy is the most cost-effective way to comply with the upcoming 0.50% sulfur cap.

Euronav has long maintained that the premium for VLSFO would be much lower than the $200/mt+ many in the industry have predicted, and unlike a number of its peers it has not installed scrubbers that would allow it to continue burning HSFO after the end of this year.

With DHT Holdings, Inc. (DHT) last year saying it was paying around $4.6 million per scrubber, it would suggest Euronav would have to pay around $330 million to fit its entire fleet with scrubbers.

Based on its current premium of $47/mt, the payback for that would be seven years.

Whether such a low premium will be maintained remains to be seen, and even in recent weeks IFO380 prices in Rotterdam have dipped under $300/mt - much less than the $400/mt Euronav said it had paid for HSFO.

Such a blanket approach to scrubber adoption is also unlikely, and given the differing levels of bunker consumption and operating profiles among vessels many advocates of the technology have chosen to put units only on tonnage where savings can be maximised.

Despite the current low premium it is paying for VLSFO, which is also lower than that suggested by early sport price indications, Euronav says it is still looking at the potential of retrofitting its non-eco VLCCs with scrubbers.

"Euronav believes that it can still fully capture the potential benefits of an investment in scrubbers after the start of the regulation. At that time, the derivatives market of LSFO should have developed in size and in volume which allow Euronav to fully lock in the benefits of the spread at the time of making the investment," it said.

"This should even provide Euronav with a 'second mover advantage' in learning the flaws of the first round of installations and take a decision based on facts without having to speculate."