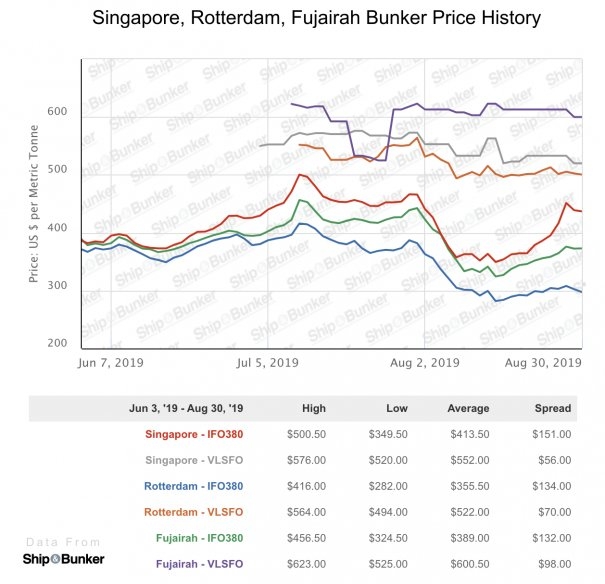 A rollercoaster month for HSFO prices has resulted in August offering little clarity on what the premium for IMO2020 grade bunkers will be. This is despite spot price indications for 0.50% sulfur VLSFO now being available for a number of key ports.

However, dramatic HSFO price movements during this period meant Singapore saw the VLSFO premium hit a high of $213.50/mt on August 15, before narrowing to a low of only $81/mt on Thursday.

The premium at month end on Friday was $83/mt.

Since early July Ship & Bunker has been publishing spot pricing for 0.50% sulfur material in the major ports of Singapore, Rotterdam and Fujairah, with indications also available in Russian Far East and Taiwan.

VLSFO pricing for additional ports is expected within the coming weeks, and in to begin for most major bunkering ports during Q4.

The two companies have signed a memorandum of understanding to evaluate options for the supply of ammonia as a bunker fuel in and around Hamburg and Houston.