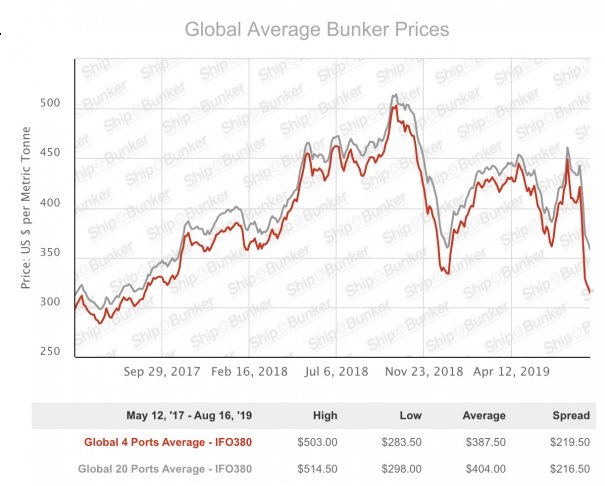 Global HSFO prices have plummeted to near two-year lows this month as the market begins to feel pressure from the upcoming IMO2020 rule.

The average IFO380 price across the four major global bunkering ports of Singapore, Fujairah, Rotterdam, and Houston has fallen 21% over the last two weeks, from $401.50/mt on August 2 to $314.50/mt on Friday.

The trend has been reflected in many other key bunkering ports

The trend has been reflected in many other key bunkering ports, with a similar drop witnessed in Ship & Bunker's "G20" Global 20 Ports Average index that tracks the average bunker price in 20 global bunkering ports responsible for the vast majority of bunker fuel sold.

The IMO2020 global 0.50% sulfur cap on marine fuel comes into force from January 1, 2020, meaning the vast majority of vessels will begin to transition away from HSFO during Q4 of this year.

Only vessels equipped with scrubbers that are able to achieve an equivalent method of compliance will be able to continue burning HSFO.

Estimates vary on exactly how many vessels will be sailing with scrubbers on January 1, and how much ongoing HSFO demand this will translate into, but even the most optimistic estimates put 2020's HSFO demand at a third of what it is today.