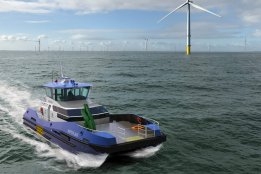 The 23.8 m RAptor 2400 crew transfer vessel has four 450 kW engines converted to run on methanol, the company said in a statement on its website this week. The firm came up the design with support from the UK Carbon Trust and the Offshore Wind Accelerator program.

Methanol is increasingly being viewed as a potential contender in the search for replacements to conventional bunkers as the shipping industry seeks to eliminate its carbon emissions, with Maersk set to take on several methanol-fuelled container ships in the next few years. Questions remain over how quickly supply chains of carbon-neutral green methanol can be set up to meet the industry's needs.

"The possibility of using green methanol marks a shift from the current linear fuel cycle to a circular fuel cycle, where harmful combustion waste products are converted back into useful fuels," Erik Johnston, project manager for Roger Allan, said in the statement.

"This will have great benefits for generations to come."

The three ships were arrested on Tuesday.