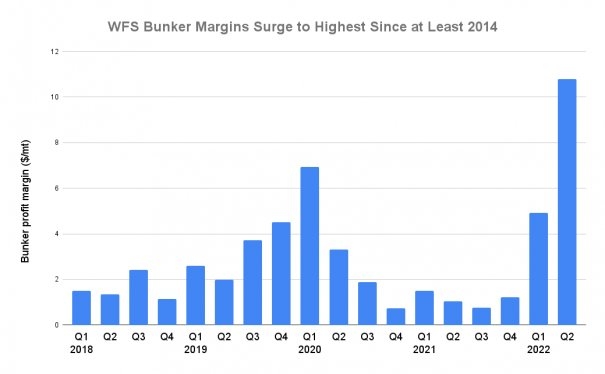 US-listed World Fuel Services has seen the income it receives from every tonne of bunkers it sells surge to at least an eight-year high in the wake of Russia's invasion of Ukraine and the subsequent market volatility, 56% over the abnormally high levels seen during the IMO 2020 transition.

The company reported net profit of $52.7 million from its marine division in the second quarter of 2022, up by 128% from the previous quarter and by 998% from the same period a year earlier, it said in quarterly results released late on Thursday. The company's marine gross profit of $78.2 million in the three-month period was the largest in its history, it said.

The firm's bunker sales volume reached 4.9 million mt, up by 4% from the previous quarter and by 6.3% from the second quarter of 2021.

That left its bunker margin at about $10.80/mt, up from $4.92/mt the previous quarter, from $1.05/mt a year earlier and the highest level since at least the third quarter of 2014, the earliest period for which data is available on its website.

The margin was 56% over the unusually high $6.93/mt level seen in the first quarter of 2020. During the uncertainty of the IMO 2020 transition concerns over the availability of the new VLSFO blends meant bunker suppliers were able to command significantly higher premiums than usual.

In a call with investors Ira Birns, chief financial officer at WFS, said the recent turmoil in the bunker market was behind the strengthened profitability of the firm's marine division.

"As evidenced in the past and then again during this past quarter, during times of elevated fuel prices, constrained credit and rising interest rates, we become a more critically valued counterparty, which increases our success rate and contributes to profitable volume growth.

"Kudos to the global marine team for such absolutely fantastic performance with solid results across all sectors and geographies.

"For the third quarter, we expect marine results to again materially exceed the prior year. However, with bunker fuel prices somewhat lower quarter-to-date, it is unlikely that the third quarter will be as strong as the second quarter."

Birns went on to discuss the current bunker-price environment.

For a good part of the second quarter, in this crazy pricing environment, bunker fuel was, on average, $1,000/mt.

"You may remember when we had the IMO regulations kick in and people converting over to the more carbon-friendly fuel, that was trading somewhere under $500/mt, somewhere between $400 and $500.

"We've always said that because marine is principally a spot business unlike aviation, which is heavily contract-oriented, as market price moves, you could kind of reset your go-to-market strategy daily, hourly, by the minute.

"And there's a pretty tight correlation over the long term between the underlying price of the commodity and our margins in that business.

"With prices at record highs, it's not surprising that our margins would have been so much stronger."

Being the big 900-pound gorilla with a solid balance sheet, we wind up generally outperforming.

Investors should not necessarily expect WFS's bunker margins to remain at their current levels, Birns added.

"Prices are still high," he said,

"They're off a little bit; I would say they're down 5% to 10% from the average levels in the second quarter so far in Q3.

"It's tough to forecast.

"One of the things I mentioned in my prepared remarks is we don't expect to repeat Q2 because of the extraordinary dynamics.

"But we're still going to have significant year-over-year growth as the market still remains tight.

"Part 2 to the story is in an environment like this where the underlying commodity is $1,000/mt, at record levels, it makes it a bit tougher for certain players in the market to compete because you need a strong balance sheet.

"You need more capital to be able to support your own working capital requirements at these levels, and we, being the big 900-pound gorilla with a solid balance sheet, we wind up generally outperforming in those scenarios.

"We generally become a much more valued counterparty because we're out there providing the amount of credit that our customers require, and they value that more than they normally do in an environment where prices are so significantly high."

Increased credit costs in the current environment of rising interest rates were significantly outweighed by the company's overall profitability in the bunker market, Birns said.

"The principal amount of cash needed to run the business in this high price environment and the incremental investment in working capital does come out of marine," he said,

"Yes, our interest expense went up, but relative to the increase in marine profitability -- I hate to call it a rounding error -- but in that regard, it was kind of in the ordinary course, because we're about $10 million up sequentially."