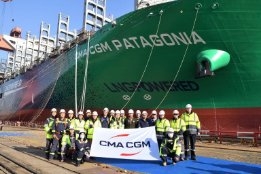 Box shipping giant CMA CGM this week has taken delivery of the first of its LNG-powered 15,000 TEU class containerships.

At 366m long, 21m wide, and rated at a capacity of 15,254 TEU, CMA CGM Patagonia is capable of transmitting the Panama Canal and is set to join OCEAN Alliance’s "MED2" Asia - Med service, Alphaliner reports.

The vessel was ordered in 2019 with China State Shipbuilding Corporation (CSSC) and followed CMA CGM's order in 2017 for the industry's first ever LNG-powered box ships. Those vessels have a capacity of 22,000 TEU, the first of which was launched in 2019.

Underlining its commitment to using LNG bunkers, the French firm has six 13,000 TEU gas-powered container ships among the other vessels it has on order.

The company's new office in the Glyfada municipality will aim to increase its sales among Greek shipowners.