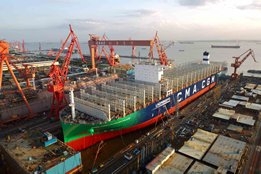 Named after the CMA CGM Group's founder, the vessel is the first in a series of nine 23,000-TEU, LNG-powered containerships ordered by the French carrier in 2017.

The launch was marked by a ceremony at Shanghai Jiangnan-Changxing Shipyard where the vessel was constructed.

CMA CGM says that compared to conventional fuels, the use of LNG will reduce emissions of sulfur oxides and fine particles by 99%, and nitrogen oxides emissions by up to 85%. With LNG's true GHG footprint still a point of contention among industry talking heads, CMA CGM puts the vessel's carbon dioxide emissions savings at around 20%.

CMA CGM's decision to opt for LNG bunkers remains the most significant commitment by a shipowner yet to use the alternative fuel.

Highlighting just how significant that decision was, in December 2017 Total Marine Fuels Global Solutions (TMFGS) and CMA CGM signed a 300,000 tonne per year LNG bunker supply deal to fuel the new ships. At the time, global LNG bunker demand was pegged at just 400,000 tonnes per year.

The French carrier has since ordered more LNG-powered box ships, and last month, Rodolphe Saadé, Chairman and Chief Executive Officer of the CMA CGM Group, said the firm will give priority to LNG bunkers to power its future high-capacity container ships.

But Woodside and the EIA both see oil prices coming off their highs.

Focus is to improve efficiency of maritime battery power.