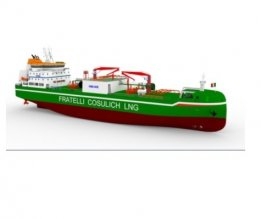 The ship is due for delivery in the summer of 2023. Image Credit: Fratelli Cosulich

Marine fuel supplier Fratelli Cosulich is set to enter the LNG bunker market in the Mediterranean.

The company has ordered an LNG bunker vessel capable of carrying more than 8,000 m3 of natural gas as well as 500 m3 of MGO, it said in a statement posted on its LinkedIn account on Monday. The ship will be built at the CIMC SOE shipyard in China, and equipped by Wartsila.

The cost of the order will be about $45 million. The firm will receive 4.5 million euros ($5.5 million) of EU funding "as the project is contributing to the decarbonisation of maritime transport by deploying LNG bunkering solutions in the Mediterranean," the company said.

The ship is due for delivery in the summer of 2023.

"We acted proactively, in order to offer the coverage of the Mediterranean basin, following the trend that sees new ships under construction equipped with alternative propulsion, especially in the field of passenger ships," Andrea Cosulich, honorary president of Fratelli Cosulich, said in the statement.

"Our group will be ready to offer its services with cutting-edge solutions and in line with the evolution of technology itself."

Bunker supplier Peninsula Petroleum has also said the initial focus of its new LNG business will be the Mediterranean marine fuel market.

The company's new general manager in Greece was previously a senior bunker trader at BMS United.